Two Kidnappings, One family and a Journalist.

Mikki is kidnapped on her way home from school one evening, the one night her parents decide she is old enough to be on her own for a few hours. Not long after the parents receive the ransom demands, through the post. Not over the phone or e-mail. The ransom says nothing about not contacting the police just how much money they want in return for their daughter alive. However, the ransom is never collected and the case goes cold. Mikki is not found.

Some weeks down the line Jenn, Mikki's mother is arrested for attempted murder of their neighbour Scott, as she found one of Mikki's pink hair clips in Scott's bed. It then comes out that Jenn has slept with Scott. Scott is arrested and his daughter then accuses his of abuse.

A few months down the line Jester Mikki's father decides to go travelling to get back into his writing. He flys to Morocco, he lands in Morocco, where he catches what he believes to be a taxi. He has however been kidnapped himself. Jester goes through a terrible time whilst being a prisoner including beatings.

When Jester makes it home he writes a book about the kidnapping of his daughter and of his own kidnapping experiences. Is all how it seems though?

Throughout all of this, the family's friend Katie who is a journalist is helping them, she is controlling the media and being the spokesperson for the family.

I started off enjoying this book, I found I couldn't put it down and I found myself praying that Mikki would be returned safely to her family. I also found myself hoping that Jenn and Jester wouldn't be torn apart by this ordeal as we see so many times.

I found Katie at this stage of the book to be a really great friend, helping with the media, it's the last thing the parents want to deal with. Giving the family advice. Yes it helped boost her career but I believed she saw that as an added extra not her reason for doing it.

When Jester was kidnapped I did think did this have something to do with Mikki's kidnapping. I also felt so bad for Jenn, first her daughter and now her husband. This book throws you through a rollercoaster of emotions.

Later on, when Katie reveals her secret I won't say any more than that for spoilers I was shocked I couldn't believe it. I didn't know whether to be angry or sad or just damn confused.

I must admit at this stage I didn't know where the book could go from here and thought it was going to end in a very disappointing way and I was no longer going to enjoy it. How wrong was I?

This book had plenty of places to go, I must say when Mikki's kidnapper is revealed it floored me. I am usually so good at guessing who done it as they say but I was so far out with this one. So seriously well done.

I was confused with the ending I don't know whether Mikki is alive or dead though so that's put my mind to thinking. I have chosen to give this book 5-Stars as it put me through my paces emotionally, it kept me guessing throughout and it still managed to surprise me. I would recommend to anyone looking for a great read. This is deffo on my to reread list. This is a book I will be thinking about for some time. 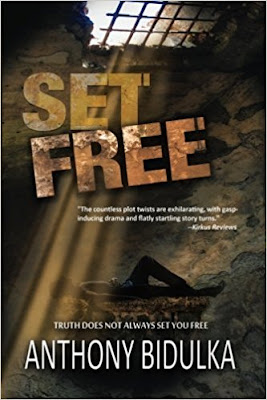