My Trip to Adele

This book follows three families and their journey to see Adele in concert in Vienna, Italy. Meet Elias and Malika, Malika a young prostitute who Elias paid for her services. He fell in love with her, she talked of learning English and moving away to other places, finding love, marriage and having children. When Elias discovers that Malika is only thirteen he panics and leaves her, he returns to Rome and doesn't look back for eight years.

Then there is Nadia and Waleed, mother and son. At the beginning, Waleed is shot at Nadia's ex-husband's wedding. We're introduced to the customs and ways of the tribe. Including how they chose to deal with the shooting incident.


Finally, we have Mariam and Yasek, a married couple both surgeons. They are having marriage problems and are seeking advice from a marriage counsellor who advises them to find a happy memory. Yasek buys tickets to Adele's concert as when he proposed to Mariam he was playing Adele's song. This just gives Miriam something else to start an argument about.

Each chapter is named after an Adele song and at the end of each chapter, there is song lyrics from that song.

I did enjoy how the book splits between the three families throughout each chapter. I found the characters to be well written. First off Elias and Malika. I found Malika's story a very sad one, her parents sold her as a prostitute at such a young age but also because she seemed so nieve about the whole thing by saying she was for sale she was just saving up so she could move away. I liked how Elias took her places and spent time with her rather than using her for sex, even before he found out her age. His reaction when he finds out her age is very compelling and you really feel for him cause he has fallen for her and she is just so young.

Waiting eight years to go back to find her is so romantic and sweet without wanting to give too much away, its a sad ending for the pair when he does find her and it just goes to show that time changed everything.

Nadia and Waleed, first of all, I found the name Waleed very strange but each to their own. When the boy was shot at the beginning of the book and you hear about the traditions and ways of the tribe and how they will handle the consequences of what happened and the police should not be involved. It made me mad, cause I know if I was a mother I would want blood so I can really see where she is coming from when she ignores them and calls the police anyway.

Nadia wants nothing more than to give her son a good life and all the love in the world despite his father, her ex-husband being the way he is. With her son loving Adele and his father agreeing to him going to see Adele in concert I was real happy for the pair of them. Again without giving too much away when it came down to it and she was going to go alone this changed my opinion of her, I thought her a bit selfish at the stage but she pulled it back and changed my mind back again.

Miriam and Yasek the relationship between these two confuses me, I have never understood people who stay together when things clearly are not working. She is a very religious woman and he claims to be an atheist which I'm sure does not go hand in hand. Miriam is the type of character you don't like from the very start really, you feel sorry for Yasek, especially when he buys the Adele tickets t try to rekindle their romance and she just throws it back in his face.

All in all, I gave this 3 Stars as I did enjoy it, I would recommend it to someone looking for a light-hearted, quick read, however, it is one I would recommend to borrow from the library rather than purchase as I don't think I would reread it. 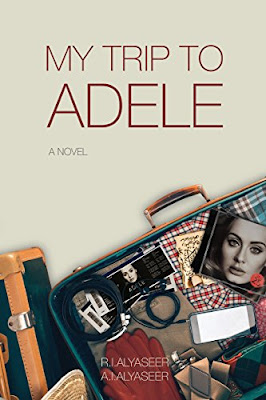