Author of the Week #3 - Charlaine Harris

Charlaine Harris started off writing mystery fictions. In 1990 she won a nomination for the Agatha Reward for her Aurora Teagarden, Real Murders book. In 1996 Harris released her first novel in the Shakespeare series a series features a women detective names Lilly Bard living in rural Arkansas. Harris herself comes from a small town in Arkansas. She finished this series in 2001 with the fifth book and a short stories.

After the Shakespeare series Harris wrote The Southern Vampire Mysteries. This series become extremely popular and was soon made into a TV series known as True Blood. The series follows a telepathic waitress and has many supernatural creatures in it. This series contains thirteen books and several short stories.

In 2005 Harris debuted with her Harper Connelly mysteries series following a girl who was struck by lightening and is then able to locate dead bodies and witness there final moments through their eyes. This series has also been optioned to be made into a TV show names Grave Sight.

A full list of all of Charlaine Harris's published works. 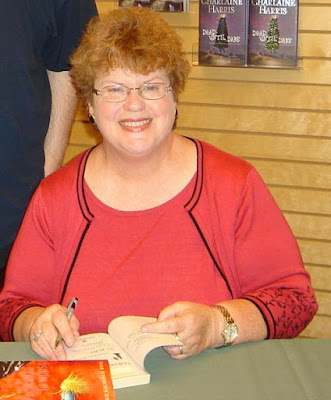